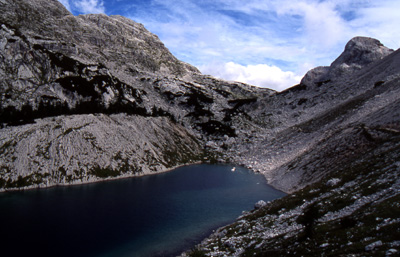 Since we starteded to live in Villach in southern Austria, some new countries come close. One of them is without doubt Slovenia, a tiny country having a lot the mountains. The best known mountain is also the largest, called Mt. Triglav with 2864m height, situated in the Julian Alps. Thus, it was a good opportunity to go there as an old friend decided to make his party for his 30th birthday in the Triglav National Park. An easy decision... The point of arrival and meeting was a small place named Ribzev Laz - small but beautiful. This tiny town is situated at the Lake Bohinj with its crystal-clear water and surrounded by high mountains at three sides. In the morning after the day of arrival we started not that late in the morning. Admittedly, we were a bit lazy. Therefore, our slovenian friends drove us to the entrance of the national park (which is one of the biggest in Europe), savings us some four kilometres walk along the lakeside. Otherwise, then we needed to start climbing immediately. 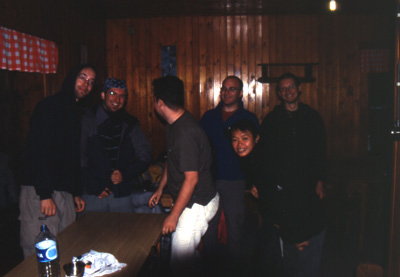 The first part was called "Komarov Wall", and indeed we just went up a steepy way for the first hours. For compensation, we were able to enjoy wonderful views. After climbing-up and heading a short stroll, we stopped at a small mountain lake. For refresh it is possible to have aa short bath, but only if you can deal with fresh water. The second half of the way for today was less steepy. Finally we reached the hut "Triglavskih Jezerih", a nice place on a kind of plateau surrounded by some lakes. Since water for clean-up yourself is hard to be found at the huts, the cold water of these lakes suddenly seemed to be rather refreshing than cold... The huts, at least the few ones we stayed-in, were well-equiped. Actually it was not necessary to bring your own sleeping-bag, and the food served was rather good (same like the wine...). This means, one is able to minimize things inside the backpack and make carrying more enjoyable. 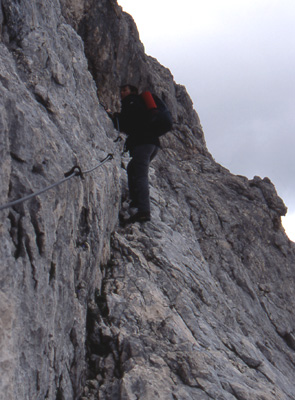 Anyway, take care to have weatherproof clothing and good trekking boots. On the parts where it is necessary to climb and/or to use the ropes provided there it is a good idea to bring cloves - especially more up in the mountains it is rather cold. Somewhere I read that Mt. Triglav is a "real" mountain, which seems to be true. Compared to Mt. Kinabalu in Malaysia, the terrain is much more demanding. It is not just hiking, you need to climb in some places. Concerning the huts, it is not a bad idea to make a reservation in advance - especially if you come in weekends or in holiday season. Nevertheless we had good luck and found as alone in a large room, offering space for at least the double number of people. Thus our sleep was good, and the next day saw us wake-up early. The weather on this second day was still good, which has been a little surprise. All forecasts predicted heavy rainfalls, and we already expected that we needed to go back in the second day. Thus we enjoy our good luck and continuing our way. It was more heading up, and the number of stones increased continuously. Vegetation was vanishing, and it start to look like a moonscape, but fascinating in some way. Relatively soon we were able to see the hut where we went to - "Dom Planika pod Triglavom" at 2401m height. anyway it took some more hours to arrive there. 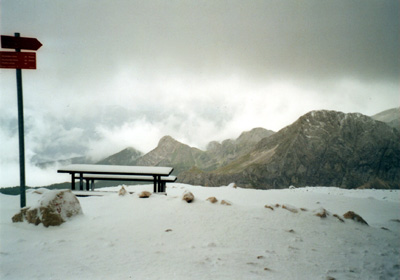 The main reason was the valley in between the mountain where we stood and the mountain where the hut was built. More detailed, we needed to climb-down 200m in height and after climb-up about 300m in height. Especially the first part downwards was a bit tricky - steepy and full of boulder, nice thing to pass. Nevertheless, in total it was a nice trek. After arrive the hut in the afternoon, at least some of us thought about continuing to the peak. It should be mentioned that we did not see the peak yet, since it was hidden by black clouds all the time. And there were more and more clouds coming, which finally make the decision for us. It started to hail, and as it stopped the time was already too late fro climb-up. There was no lake around, and thus we enjoyed the food, some beers, the outside toilet and ofcourse the wonderful view around. Again we started to sleep early, to be ready in the morning. 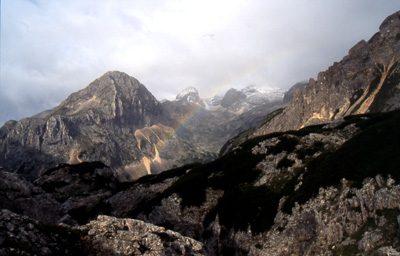 The peak of Mt. Triglav was about one hour away, and then we intended to go down completely in the third day. However, the next morning showed some surprise. While the peak was still in the clouds (which should not be the very big problem except you can not look around from there), it also started to have the snowfalls in the night. We found about 10cm of fresh snow, and there was still coming more. Thus we were urged to cancel the plan to climb-up the peak, and after breakfast we went back. The snowfall changed to a some kind of light rain in a height of about 2250m, further down it stopped as well. Anyway, the snow in the mountain and the rainfall gave some nice views later as the sun came back - good opportunity to make some pics. 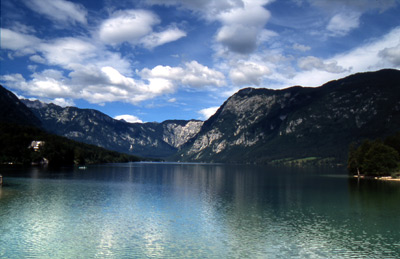 The way down seemed to be endless (like anytime if you return from a mountain), but there were some places to have a cup of tea on the way. While going down the plants started to become larger again until we were back in the forest. As a kind of highlight on the way down to a place called Stara Fuzina, we stopped at a waterfall and continued alongside the small canyon with the fast-rushing water. Finally we arrived back at Lake Bohinj where we took a bath first (here, the water was really warm - at least in comparison with the mountain lakes). After that, we could start to focus on the birthday party later in the evening - even if we never were able to have a look at the peak of Mt. Triglav which was always hidden by the clouds...