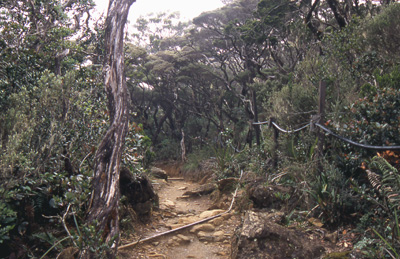 Mt. Kinabalu, or more exactly Low's Peak, has a height of 4095m - and therefore it is the highest mountain between Himalaya and Papua New Guinea and of course the highest point at Borneo. If one already is visiting Sabah, the trek should not be missed. Mt. Kinabalu is accesable to not that experienced hikers as well and count to the most simplest peaks of it's height. There are no temperature below zero, and you will not need special equipment except some warmer clothes at the peak.
But, the peak belongs to the Mt. Kinabalu National Park and you need a permit as well as a guide. Unfortunately, the only way to get the permit as well as accomodation inside the park is to go to Kota Kinabalu, the capital of malaysian federal state Sabah. 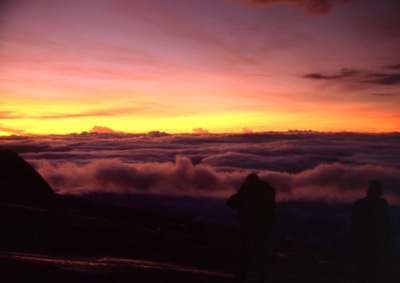 At our stay in Kota Kinabalu (KK), we noticed that our information were already out-dated. Probably, the company who is responsible for granting the permits or/and it's location within KK changes more or less regularily. Since KK belongs to the fastest growin' towns in South East Asia and already counts a population of more than 200.000, it needs some time to find the right place. Beside getting the permit, KK offers very few reasons to stay longer than necessary - there are mostly new, boring buildings and to many people. If you plan to climb up Mt. Kinabalu, keep in mind that it is not that cheap, for the trip including three overnight stays, we paid app. 150€ each. Look out for some people to share the guide for sharing the money as well. 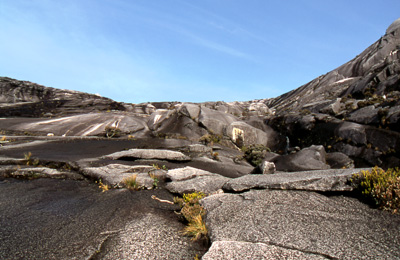 From KK take a bus into the direction of Sandakan to reach the gates of the National Park. You will notice, that even the way is already an expirience since you already reach a height of app. 1500m. For the climb, you probably need only a few things - I used a small backpack and took with me only a camera, a waterproof jacket, sleeping bag, things for personal hygiene, some shirts and, which is very important, water and some chocolate. Later we noticed, that even a sleeping bag is not really necessary since the facilities at Laban Rata, which is one of the huts at a height of app. 3200m, provided everything which is necessary including blankets. 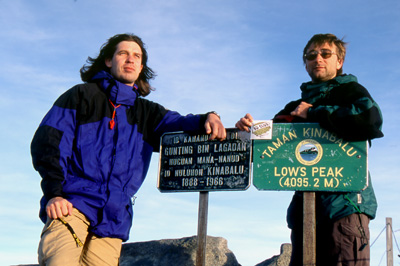 It is possible to leave everything you do not need for the climb at the central building of the park administration. This is also the place where you will meet your guide in the morning. In our case, we joined with a elder couple in their sixties from the US to share the money for the guide. Just to add - these two people were the first really congenial Americans I ever met, very nice people. The first part of the way are 4km on a usual street - it is not really necessary to walk that way since there is the chance to take a pickup as well. But, we decided to walk the full way, although the way along the street is a bit boring. After that, you reach the real entrance gate of the National Park. 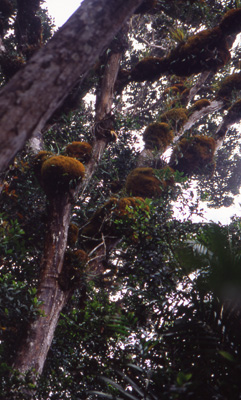 From there, the first part up to the huts at 3200m height counts 6km. Sounds very easy, but take into account the difference in height. There is not a single part of the way which goes downhill... thus, some fitness is needed at least. For the people who need a rest, there are eight or nine rest shelters on the way. And, do not forget to have more than a look to your surrounding. At the way up, you pass by several several vegetation zones which keeps the walk interesting. You even will find some carnivorous plants, but they are less spectacular then sometimes expected. You probably will walk through the clouds earlier or later, which changes the landscape to somewhat like a mystical place. As we arrived at Laban Rata, we really needed a rest, but it was good that we arrived not too late - just 15min after our arrival rainfall had started and lasted until midnight. We decided to start at 4am the next morning, but we were urged to get up much earlier. Almost all of the people started at 2.30am and get up one hour before. Since Laban Rata is completely build up with timber, you hear every footstep of everyone... The good thing is, that breakfast is provided from 2am to 3am at Laban Rata.
Anyway, you are about to start in deep darkness if you want to be at the peak for sunrise. The part from the huts to the peak is the steepest and hardest of the trail. The way has a length of 2.7km only, but you have to climb up app. 900m. Remember, that you have to climb 600m in height at only one third of the distance. Fortunately there are ropes which hauls yourself up the granite sheets. At the time of sunrise, we were nearby the peak which finally was quite good - here, we were alone to welcome the sun. If you ever made the expirience of a sunrise high about the clouds, you will never forget this. It is worth the whole way indeed. 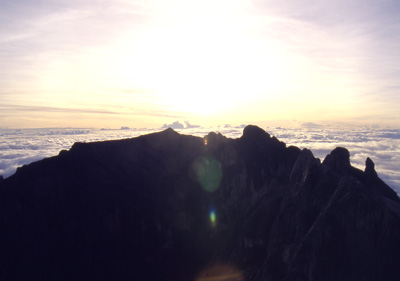 If the sun is on the rise up, the clouds start to follow very rapidly. At least, this will ease the way downhill. About 9am we were back at Laban Rata, making a break to enjoy the sunshine. After that, we continued downhill and arrived at the park headquarter some hours later. The way down is really hard and it seems to be a good idea to take another day. But don't worry - if you should be unable to go back by your own power, the guides are there to help you. In my opinion, it was there main task to guide back anybody safely since there was hardly a chance to miss the right way...
In summary, it is a very nice trail as long as it does not rain. Rainfalls seem to be not that unusual, taking into account that every picture of Mt. Kinabalu in Sabah showed clouds surrounding the peak...