Already while arriving at Kuala Lumpurs modern and somewhat oversized international airport it becomes clear, that Malaysia aimed high. Once into the town, the huge number of skyscrapers and an excellent transport infrastructure do it's own to support that supposition. Although founded about 130 years ago only, the town with it's app. 2 million inhabitants is known worldwide - last but not least thanks to the worlds largest building which are the Petronas Twin Towers with a height of 585m. There have been changed a lot of things since my first visit to the city in 1998. The airport is now connected to the city by train, as it is in case of the harbour. 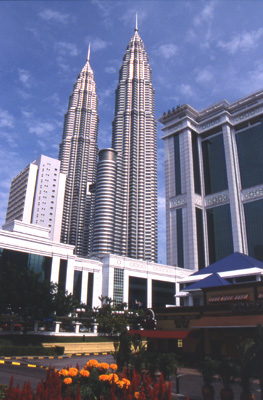 There are a number of rail transport systems which, although causing some confusion due to the different names, ensure effective transport through the town. The old exotic-style central railway station s still there but delivers it duties to the newly built station KL Sentral. As during my last stay we got a room again in Chinatown which is from advantage due to the central position. Therefore, most places of interest are easy accessable. Although we arrived with the beginning of Chinese New Year Celebrations, not many things happened to be noteworthy. Nevertheless, as we walked to Merdeka Square (where the foundation of Malay Federation was officialy made publish) in the evning we found some iind of party goin' on and lots of people. The next day, jet leg took some tribute, therefore we decided to stay in the city area. As we realized, there was a possibility to visit the Petronas Twin Towers. 800 people daily were allowd to go at the skybridge in between the two towers - except Monday. Not to mention, ofcourse it was just Monday... Alternatively, we visited the TV tower instead which was not that far away. Most interestingly, the TV tower has a height of 490m only, therefore the twin towers are significantly taller. But, since the TV tower was built up on top of a small hill it seems to be the higher building. In the evening, we walked to Little India, but in this part of the city it was surprisingly quiet. After looking around for a while we found a nice indian restaurant and got a nice dinner finally. Ofcourse, one has to use the fingers for eating... The diversity in food is definitely one very nice thing related to a truly multi ethnic society - you may choose of all kinds of chinese, indian or malay food at least. 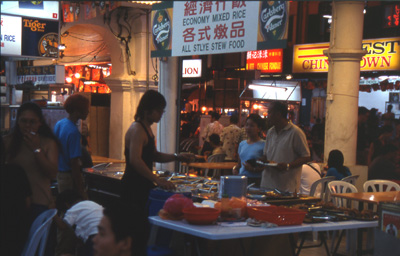 The next day we went to the Batu Caves which are situated app. 13km outside the town. The caves with all the shrines are a pilgrimage place for malaysian hindu people. To access the main caves, one has to climb up 272 stairs. And, once there, it felt as being in India suddenly. Back to KL, we failed to visit the national mosque (Masjid Negara) since it was closed for visitors at that time of the day. Trying to go for the butterfly park failed as well - it was already to late for entrance. In the evening, we gave Little India another try, and today, there was live on the streets. But, arriving back to Chinatown later we found all pubs just overcrowded. Finally, we found some empty seats in a pub outside the central market building which has been good, but more expensive as well. Concerning prices for alcoholic beverages - these prices are rather high, especially if compared to usual prices for food and drinks. But, it is a muslim country, therefore no one should be surprised about it. 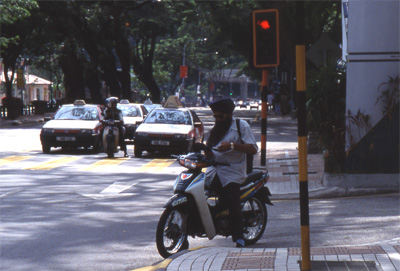 The next morning we tried to get two out of the 800 tickets for visiting the Petronas Towers - and obviously we were too late. Thus, we decided to get up earlier the next morning to keep a chance. Alternatively, a decision was made to visit the Friday's Mosque (Masjid Jamek) in the heart of the city. Here we got more luck and it was opened for the public at this time - a really nice building. In the afternoon, we made our way to the butterfly park again and continued to the neighboring bird park later. Both parks were nice, but nevertheless most birds prefer to vanish if a group of people comes closure. Therefore, we were able only to observe some more fearless species. At the way back to our hotel, there was the possibility to visit the national mosque. It is really a large building, offering space for 20.000 people. But compared with Alabaster Mosque in Cairo, it is a simple building which only a few things to see. 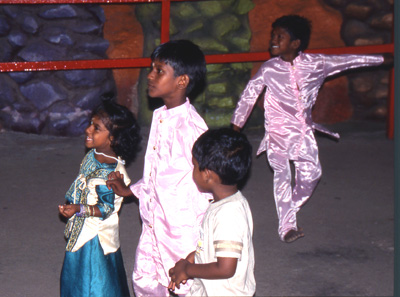 Later in the evening, again lots of people were on its way through Chinatown. But, again we were not able to notice some kind of celebrations - we later found, that Chinese New Year is celebrated for about two weeks, and that the spectacular events take place at the end of this period. At least we found some seats in a pub to have dinner and looking at all the people around. Anytime in the evening a TV team showed up, making some recordings for a while... The next morning we got up early. It was our last day in KL, and we finally wanted to visit the Petronas Towers. Obviously, we arrived good in time, and only a few people were in queue. But, a short time later thewaiting queue filled up with people - the tickets seem to be demanded by many people. Anyway, we received two of the tickets which were free of charge to our surprise. One only has to care about showing up at the time printed at the tickets, otherwise he has to join the queue again... 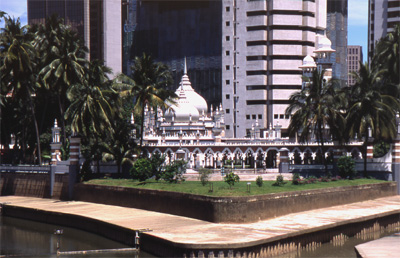 Since we were among the first people in the queue, there was no need to wait that long. To look down from the skybridge was some special kind of feeling. One should consider, that both towers move in the air for some meters and that the bridge has to tolerate these movings. Therefore, the construction is something to admire. Ofcourse there were many things to make a photo of, but the visiting time was limited to 15 minutes only, unfortunately. Back again in Chinatown, we had a late but substantial breakfast. Later, it was necessary to pack our belongings. In the early evening, we went for the airport again, to catch our flight to Brunei Darussalam.