A Stay in Brunei Darussalam (February 2002) 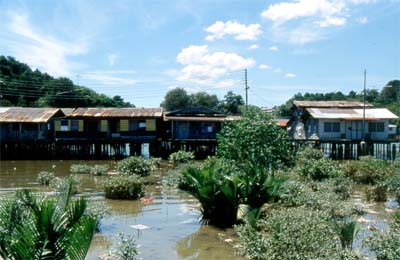 Arriving in Brunei (on the way from Peninsular Malaysia to Sabah) was something strange - almost anything I knew was that it is a oil sultanate and that there are not many visitors. The people of Brunei do not pay any taxes and there is free education and health care for everyone and even subsidies for cars - paid by oil money. The wealth of the country was easy to realize - since our arrival was about midnight, the only way to go into the capital city Bandar Seri Begawan (BSB) with its 60.000 inhabitants was by Taxi. Considering the price (30B$ or about 20€), I felt something like at home in Germany. Further, in Brunei is only one youth hostel which is situated in the capital. If you want to stay there, arrive a bit more early since it is closed late at night. 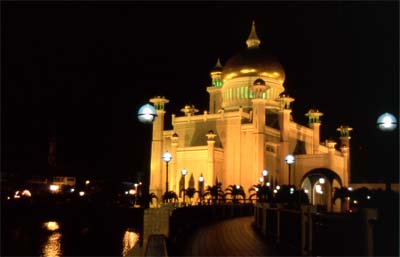 For a hotel expect at least 50B$ for a double room - don't forget to bargain. Thus, Brunei is expensive even compared to Sabah, so be prepared. At least food is not that expensive and you won't have problems to get a meal for about 3€. For self catering it is easy to buy things on the markets (again - do not forget to bargain) or at fixed prices in department stores. But don't expect to get any kind of alcohol - Brunei is a muslim country under Islam laws. The official name, Brunei Darussalam, is translated as 'Brunei - Abode of peace'. In fact it is peacefull, but otherwise no nigthlife exists and even most restaurants are closing at 9pm... The Brunei people (mostly Malay, followed by Chinese and Indian) are very friendly. 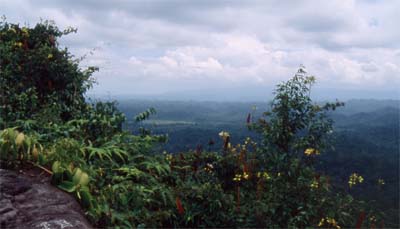 Public transport stops about 6pm (what we did not expect) and to go back to our place in the capital we were forced to hitchhike - and we did not wait that long and even got some unknown (but delicious) fruits. Or getting the last bus which was on the way to another destination in BSB - lead to a new bus route with the final destination of our hotel... In general, public transport is inexpensive and, at least around BSB, well organized. In case of proceeding to Sabah the best way is via express boat from the Muara port. To reach the ferry terminal, take the express bus which runs app. 1h15min before the ferry departs. 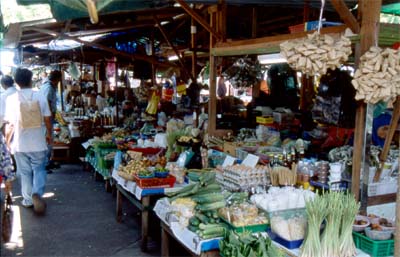 The new Tourist Office, which resides in the same building as the General Post Office of BSB, will tell the departure times of the express boats to Labuan or Lawas. They people there are also helpfull with some other informations and some maps. Most things worth a visit are in or around BSB, the most interesting are the Omar Ali Saifuddien Mosque and the Kampung Ayer (shown in the pictures) - villages built on stilts along the Brunei river where half of the capital's population live. A nice place to walk around and get a bit in touch with the people. Further, there are some museums - the one devoted to his majesty maybe the most curios. It reminds me a lot at times passed by - our former 'socialist' leaders behaved in a very similar way and built there own monuments. 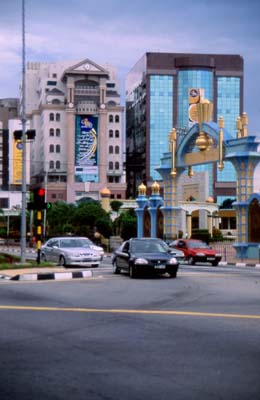 But at least the Sultan of Brunei shares his wealth with his people and has some sense for keeping a economy running well. Of course, he does not like any criticism...and he is still among the richest men in the world. As another attraction for the people who like it there is the biggest amusement park in the world in Brunei at Jerudong - a present of the sultan to his people. Nevertheless, this 'Disneyland of Brunei' is somewhat oversized - at our short visit there we found a very few people only. At least you will not find any queues for waiting...but it was a bit strange for me. Brunei consists of two parts separated by a small part of the malaysian state of Sarawak. To go to the eastern part take a boat which does the ride to Bangar in 45 minutes. This boat trip lead along the rivers, surrounded by jungle forrest, and a small part of the open sea and it is worth the way. With some luck there are some crocodiles to see. The eastern part itself is covered by large areas of jungle as wide parts of Borneo do. We did a one hour trail to a low summit not far away from Bangar. The starting point could be reached by hiring a taxi for app. 25B$. It has been a nice walk on plankways with a nice view from the summit. Of course - you can have such walks allover Borneo...but if you just stay in Bangar, there is not much else to do. Thus, Brunei is interesting due to its differences to other countries in the region and the friendly people. If its on the way, allow about 4 days or even more if you want to visit some other places than BSB. Nevertheless, it does not make much sense for travelling to Brunei only - except for those from south-east asia. And - be aware of some higher expenses than in surrounding Malaysia.